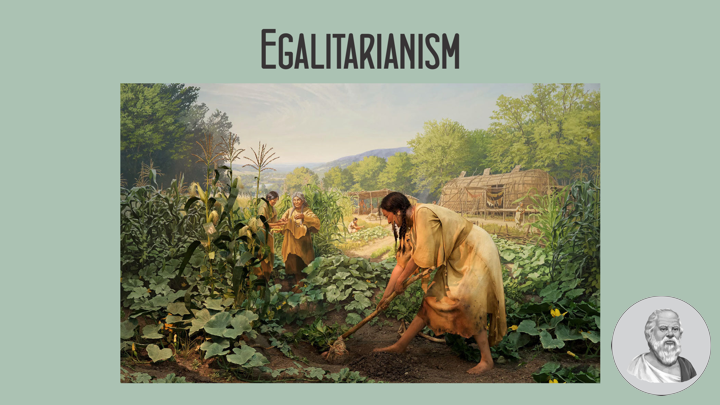 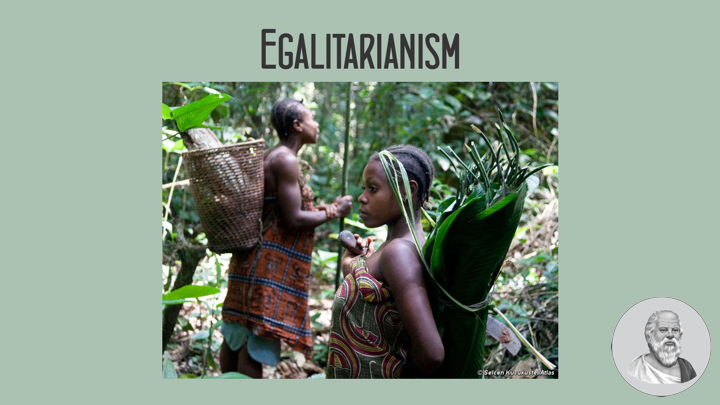 Egalitarianism is a school of thought within philosophy that builds from the concept of social equality, prioritizing it for all people. Egalitarian doctrines are generally characterized by the idea that all humans are equal in fundamental worth or moral status. Egalitarianism is the doctrine that all citizens of a state should be accorded exactly equal rights.

Fully modern humans arrived on the scene about a quarter million years ago, and until quite recently they all lived hunter-gatherer lifestyles. In these primitive societies, the men and women hunted, fished, or scavenged for meat, gathered fruits, roots, and vegetables. They lived in small groups of around 100 to 150 people because this was the largest population that the surrounding terrain could support.

Humans then apply this sense of agency to interpreting social interactions. That is to say, we not only believe we have agency, we also believe others have agency as well. Thus, we judge the actions of others depending on whether we deem them to be intentional or not. We can easily forgive the person who accidentally steps on our foot, but we really need an explanation and an apology if someone purposely treads on our toes.

In a primitive communist society, the productive forces would have consisted of all able bodied persons engaged in obtaining food and resources from the land, and everyone would share in what was produced by hunting and gathering. There would be no private property, which is distinguished from personal property such as articles of clothing and similar personal items, because primitive society produced no surplus; what was produced was quickly consumed and this was because there existed no division of labour, hence people were forced to work together. The few things that existed for any length of time were held communally, with matrilocal residence and matrilineal descent and reproductive labour was shared. There would have been no state.

Hunter-gatherers tend to have an egalitarian social ethos, although settled hunter-gatherers are an exception to this rule. The egalitarianism typical of human hunters and gatherers is never total, but is striking when viewed in an evolutionary context. One of humanity’s two closest primate relatives, chimpanzees, are anything but egalitarian.

Within a particular tribe or people, hunter-gatherers are connected by both kinship and band membership. Postmarital residence among hunter-gatherers tends to be matrilocal. Young mothers can enjoy childcare support from their own mothers, who continue living nearby in the same camp. The systems of kinship and descent among human hunter-gatherers were relatively flexible, although there is evidence that early human kinship in general tended to be matrilineal.