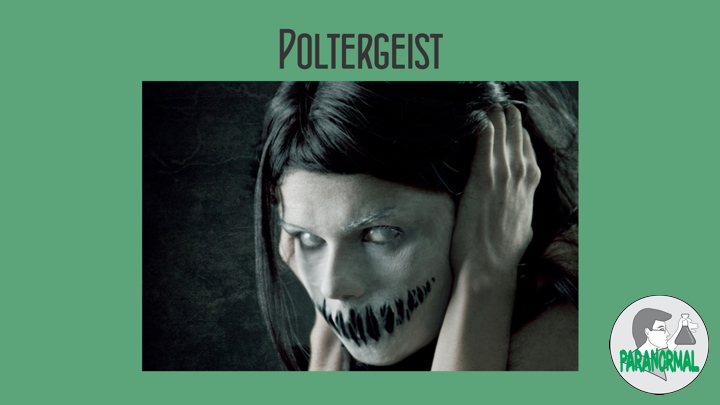 Do poltergeist exist? I assumed at first that poltergeist incidents were the product of human trauma: the unconscious release of pent-up negative energies of one individual.

A poltergeist is a type of ghost or spirit that is responsible for physical disturbances, such as loud noises and objects being moved or destroyed. Most claims about descriptions of poltergeists show them as capable of pinching, biting, hitting, and tripping people. They are also depicted as capable of the movement or levitation of objects such as furniture and cutlery, or noises such as knocking on doors. They have been described as troublesome spirits who haunt a particular person instead of a specific location. Some variation of poltergeist is found in many different cultures. Early claims of spirits that supposedly harass and torment their victims.

In the typical poltergeist outbreak, small objects are hurled through the air by unseen forces, furniture is overturned, or other disturbances. Poltergeist phenomena could be explained by the movement of underground water causing stress on houses. It is suggested that water turbulence could cause strange sounds or structural movement of the property, possibly causing the house to vibrate and move objects. Placing specific objects in different rooms and subjecting the house to strong mechanical vibrations. That seismic activity could cause poltergeist phenomena the effects of environmental geomagnetic activity on paranormal experience.

Often, when I was lying in bed at night, heard noises as though my drawers were being opened and shut, the top of the toilet stand raised and shut down carelessly, opposite bed places opened and shut, etc… I have also very, very often been sensible of the presence of something invisible around me, and could have put my hand on it, or in the spot where it was, so I was convinced that all this occurred without I feel the least alarmed, or caring a bit about it, more than that I could not understand, or account for what I felt or heard.

When a scientist has a suspected poltergeist entity that causes physical disturbances, it is known as a false poltergeist. When turbulent airflow passes through an opening in the room. The natural frequency of resonance depends on the room’s volume, thickness of the walls, and area of the opening. If this value falls within the range of infrasound, below 20 Hz, it can cause creepy sounds in the audible range, perhaps leading to a suspected poltergeist. Infrasound can even vibrate in our internal organs. This explains why people who recount paranormal experiences often describe feelings of nausea; anxiety; and most commonly, coldness.

Supernatural events, it is believed that embodied the splintering and contradiction of a traumatic experience, a poltergeist conjured the uneasy sense that something both was and was not real, that an event recurred as if it were outside time, undead. A poltergeist is perhaps the best-known, and most feared, type of ghost. No one knows for certain what ghosts are, or if they even exist; some believe that they are spirits of the dead who for whatever reason get “lost” on their way to the afterworld; others think that ghosts are the souls of people whose deaths were violent or premature.

Surveillance cameras and cell phones are everywhere, yet no one has ever captured a clock flying off a shelf on its own or cabinet doors violently banging open and closed in an empty kitchen. Though there’s no scientific evidence for poltergeists or any other types of ghosts, they continue to intrigue, entertain and scare us, just as they have for centuries. Some parapsychologists view poltergeists as a type of ghost or supernatural entity which are responsible for psychological and physical disturbance. Others believe that such activity originates from “unknown energy” associated with a living person or a location.

Many people believe that spirits of the dead are responsible for poltergeist activity. This is said to be because people who experience them perceive an underlying intelligence and meaningful communication with an otherworldly being. This view proposes that a disembodied consciousness or soul survives bodily death.