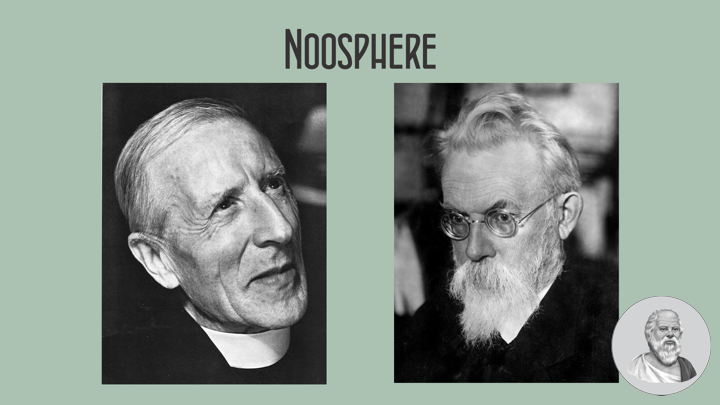 The noosphere is a philosophical concept developed and popularized by the biogeochemist Vladimir Vernadsky, and the Jesuit priest, scientist, paleontologist, theologian, philosopher and teacher Pierre Teilhard de Chardin. Vernadsky defined the noosphere as the new state of the biosphere and described as the planetary “sphere of reason”. The noosphere represents the highest stage of biospheric development, its defining factor being the development of humankind’s rational activities.

The word is derived from the atmosphere and biosphere. The concept, however, cannot be accredited to a single author. The founding authors Vernadsky and de Chardin developed two related but starkly different concepts, the former being grounded in the geological sciences, and the latter in theology. Both conceptions of the noosphere share the common thesis that together human reason and the scientific thought has created, and will continue to create, the next evolutionary geological layer. This geological layer is part of the evolutionary chain.

According to evolution does not end with mankind and Earth’s biosphere evolved before humans existed. He also maintained that one-cell organisms develop into metazoans or animals, but some of the members of this classification develop organisms with complex nervous systems. This group has the capability to acquire intelligence. When Homo Sapiens inhabited Earth through evolution, a noosphere, the cognitive layer of existence, was created. As evolution continues, the noosphere gains coherence.

There are several conflicting usages of geosphere, variously defined. It may be taken as the collective name for the lithosphere, the hydrosphere, the cryosphere, and the atmosphere. The different collectives of the geosphere are able to exchange different mass and/or energy fluxes. The exchange of these fluxes affects the balance of the different spheres of the geosphere. An example is how the soil acts as a part of the biosphere, while also acting as a source of flux exchange.

The biosphere, also known as the ecosphere, is the worldwide sum of all ecosystems. It can also be termed the zone of life on Earth. The biosphere is virtually a closed system with regard to matter, with minimal inputs and outputs. With regard to energy, it is an open system, with photosynthesis capturing solar energy at a rate of around 130 Terawatts per year. However it is a self-regulating system close to energetic equilibrium. By the most general biophysiological definition, the biosphere is the global ecological system integrating all living beings and their relationships, including their interaction with the elements of the lithosphere, cryosphere, hydrosphere, and atmosphere. The biosphere is postulated to have evolved, beginning with a process of biopoiesis or biogenesis, at least some 3.5 billion years ago.

This work further which could explain increasing complexity the evolution of mind. Many of the most interesting changes in living things have been largely discontinuous with past evolution. Therefore, these living things did not necessarily evolve through a gradual process of natural selection. Rather, he posited, the process of evolution experiences jumps in complexity, in a sort of qualitative punctuated equilibrium. Finally, the complexification of human cultures, particularly language, facilitated a quickening of evolution in which cultural evolution occurs more rapidly than biological evolution. Recent understanding of human ecosystems and of human impact on the biosphere have led to a link between the notion of sustainability with the “co-evolution” and harmonization of cultural and biological evolution.