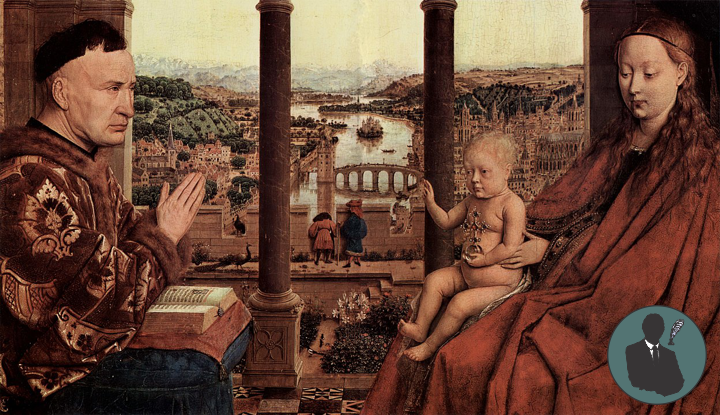 The Virgin with Chancellor Rolin 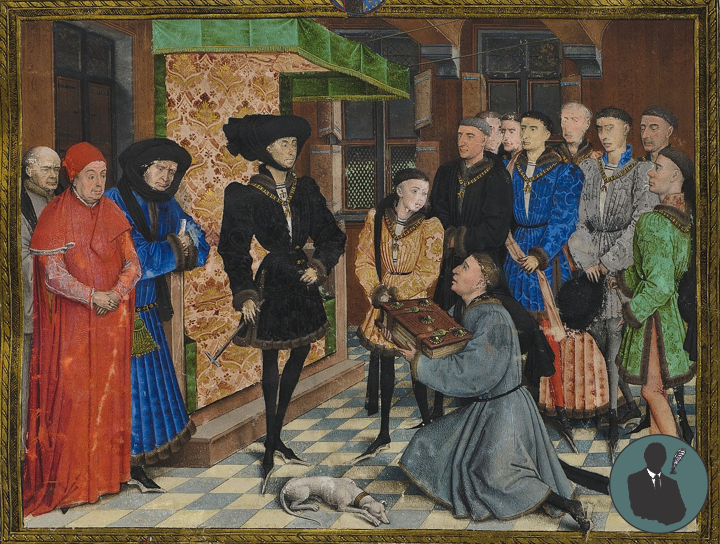 Philip the Good of Burgundy and Courtiers, with Rolin at his right hand. 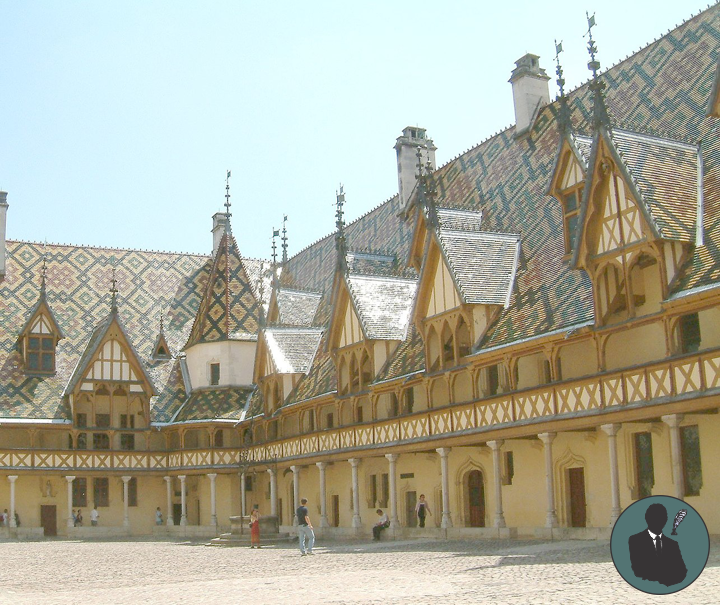 Nicolas Rolin (1376–1462) was a leading figure in the history of Burgundy and France, becoming chancellor to Philip the Good (Philip III, Duke of Burgundy).

Of bourgeois origins, Rolin was born in Autun in 1376 and baptized in the family church of Notre-Dame du Châtel across the street from his home. Nicolas’s granduncle managed to parlay a small inheritance and some good luck into significant landholdings and his grandfather was a prominent, if not particularly wealthy Autunois. Nicolas’s father was a successful landholder who transformed his financial windfall into good marriages for his sons.

The rents and other income accrued from his properties, most of which were related to viniculture, were substantial enough that he had become fairly prominent by the time of his death in 1389, when he was buried in the Cathedral of Saint Lazare in Autun. Coming into a significant inheritance in his teens, Rolin pursued his studies of law in Avignon as a wealthy young man. He inherited lands in such famous wine-producing areas as Mersault, Auxey, Volnay, Beaune, and Pommard, and his landholdings became even larger following the death of his brother, Jean.

Rolin’s first marriage in 1398 was part of a triple marriage of his widowed mother to a bourgeois of Beaune, accompanied by the marriages of her two sons to two daughters of the bridegroom, Perrenet Le Mairet. However all three of these brides were dead within a few years.

Rolin spent the majority of his life working for the Valois dukes of Burgundy, and while he was wealthier than many of those with titles around him, he was not noble. That at a court where the roturier, whatever his office or wealth, was always second-best to the noble born-and-bred, lesser social origins were an embarrassment which one did not seek to expose or explain at length. Chastelain, a prime example of this himself, reflects the values of the milieu that had adopted him in his aloof treatment of those who climbed the social ladder. Chastelain was a member of the minor nobility with limited financial resources and his position at court may account, at least in part, for his unflattering description of Rolin.

Rolin began his career as a lawyer in the Paris parliament and was quickly made chief legal council for John the Fearless in 1408. He served as a chief legal advisor and as an ambassador for the duke until John’s brutal murder in Montereau in 1419. John’s son, Philip the Good, named Rolin chancellor of Burgundy on December 3, 1422, and with this new title Rolin continued his ascent, soon becoming one of the most important diplomats on the European political stage. Rolin was charged with interpreting, negotiating and enforcing the legal rights and regulations of the duchy as well as oversight of all accounting. He served as keeper of the duke’s seal and was involved in most domestic and foreign affairs of state. Performing this service during the years in which Burgundy’s relations with France and England were particularly strained, Rolin acted as a trusted counselor to Philip the Good, helping him navigate his way through treacherous political waters. Rolin’s third marriage, to Guigone de Salins, was also his most upwardly mobile since the bride was a member of the high nobility. In 1423 or 1424, Philip the Good knighted Rolin, and Guigone was made a member of the duchess’s court.

The Hospices de Beaune or Hôtel-Dieu de Beaune is a former charitable almshouse in Beaune, France. It was founded in 1443 by Nicolas Rolin, chancellor of Burgundy, as a hospital for the poor. The original hospital building, the Hôtel-Dieu, one of the finest examples of fifteenth-century Burgundian architecture.

The Hôtel-Dieu was founded on 4 August 1443, when Burgundy was ruled by Duke Philip the Good. The Hundred Years’ War had recently been brought to a close by the signing of the Treaty of Arras in 1435. Massacres, however, continued with marauding bands till roaming the countryside, pillaging and destroying, provoking misery and famine. The majority of the people of Beaune were destitute, and the area had recently suffered an outbreak of plague. Nicolas Rolin, the Duke’s Chancellor, and his wife Guigone de Salins, responded by building a hospital and refuge for the poor. Having gained permission from Pope Eugene IV in 1441, the hospice was built and consecrated on 31 December 1452. In conjunction, Rolin established the “Les sœurs hospitalières de Beaune” religious order.