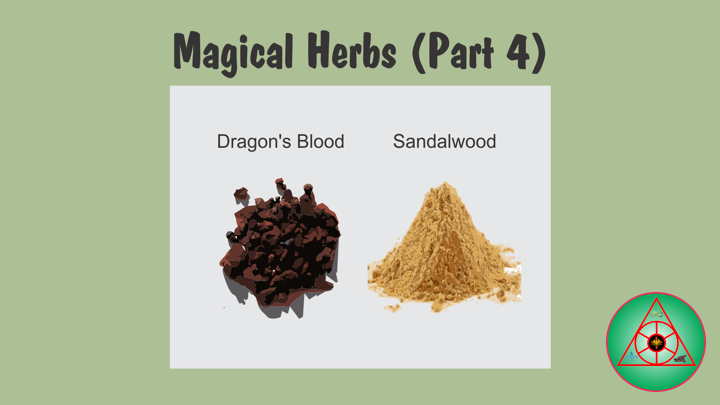 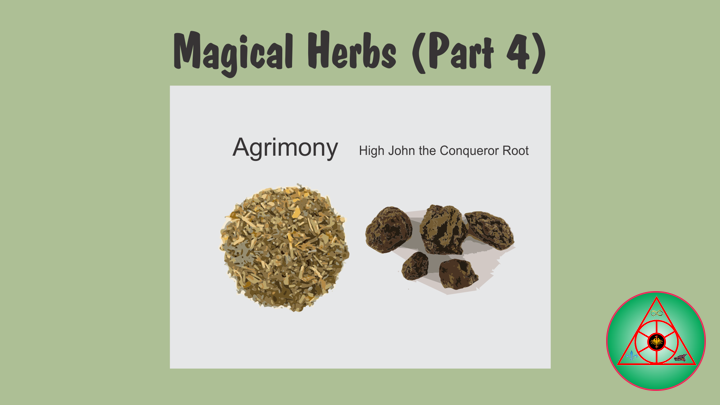 So, let’s talk magical herbs. Whether you think of them as mysterious plants that grow in the forest or the row of little bottles in your kitchen cabinet, they’re pretty useful, and they can be pretty confusing, even intimidating. What do you do with them? Which ones do I need? These herbs will help you with almost any need or problem you may have, as we shall explain. If you’re a practitioner of a modern magical tradition, chances are good that you’re in the habit of using herbs. Here’s a list of herbs that everyone should have on hand for magical purposes. Think of it as a basic Wizard or Witch’s arsenal of helpful herbs. Keep a few of these in your magical supply cabinet, just in case the need arises.

Once you have acquired your supply of herbs, we have a few suggestions regarding storage. Herbs are best kept in a cool, dry, dark location to maximize their lifespan. Excessive heat and moisture can cause them to become moldy, and prolonged strong sunlight can dry out and fade them. Specific methods of storage are up to you. Keep them in their plastic bags, stored in a cabinet. Transfer them to attractive glass jars with fancy ornamental stoppers. Whatever makes you feel magical and keeps your herbs fresh and easily accessible is fine.

Dragon blood tree, is a dragon tree native to the Socotra archipelago, part of Yemen, located in the Arabian Sea. It is named after the blood-like color of the red sap that the trees produce. Dragon’s blood is a bright red resin which is obtained from different species of a number of distinct plant genera Calamus. The red resin has been in continuous use since ancient times as varnish, medicine, incense, and dye. The resin is exuded from its wounded trunk or branches. Dragon’s blood is also obtained by the same method from Dracaena cinnabari, which is endemic to the island of Socotra. This resin was traded to ancient Europe via the Incense Road.

No, this isn’t Blood from a Real Dragon. Dragon’s Blood resin comes from several species of palm tree. When cut, the roots and tree “bleed” a deep red resin, which has been used as a holy incense, dye, and varnish for centuries. The reason it is that the resin used to be packaged for export in palm reed leaves. Dragon’s Blood resin is often used as a substitute for human or animal blood when working with antiquated incense or spell recipes. Dragon’s Blood is great for almost any magical purpose: from love to hexing, power to protection. The resin will add power to any working. Burned alone, Dragon’s Blood is cleansing and empowering.

Love, protection, and purification. Steep in red wine for a full cycle of the moon to use as a “Blood Offering” for spells that call for this, Do Not Drink The Wine. Place in windows and doorways to keep curses and evil spirits out. A favorite root for use in magical to defeat hexes and spells aimed against you.

Sandalwood is a class of woods from trees in the genus Santalum. The woods are heavy, yellow, and fine-grained, and, unlike many other aromatic woods, they retain their fragrance for decades. Sandalwood oil is extracted from the woods for use. Sandalwood is often cited as one of the most expensive woods in the world. Both the wood and the oil produce a distinctive fragrance that has been highly valued for centuries. Sandalwood oil is used in perfumes, cosmetics, sacred unguents, and as a mild food flavouring.

Sandalwood Chips are one of mankind’s first sacred wood incenses. It is a base for most incenses on the market today, as well as fine perfumes. Regarding creating incenses yourself, Sandalwood chips are a nice addition when small quantities are called for. Sandalwood powder will make an excellent base if oils are to be added to your blend. When used in sachets, Sandalwood Chips are better used than the powder, as the chips can easily be anointed with oils, and will not seep from the bag, as powder may.

Sandalwood Chips are an all purpose herb, used for all manner of workings, from love to curses, healings to bindings, sacred offerings to banishings. Burned alone, Sandalwood cleanses and blesses a place, creates an atmosphere of love, and establishes sanctity. Many who observe a daily meditation practice choose to burn Sandalwood alone to enhance the experience. Sandalwood Chips are an essential magical herb in any cunning cupboard.

Scatter sandalwood powder around the home to clear it of negativity. Burn during protection, healing, and exorcism spells. Use the wood for healing wands. Write your wish on a chip of sandalwood and burn it in the censer or cauldron while visualizing your wish to make it come true. Helps in healing by aligning the chakras for better energy flow. Good for meditation, healing, and manifestation. Facilitates concentration.

Agrimony is a genus of 12–15 species of perennial herbaceous flowering plants in the family Rosaceae, native to the temperate regions of the Northern Hemisphere, with one species also in Africa. In ancient times, it was used for foot baths and tired feet. Agrimony has a long history of medicinal use. The ancient Greeks used agrimony to treat eye ailments, and it was made into brews for diarrhea and disorders of the gallbladder, liver, and kidneys. The Anglo-Saxons boiled agrimony in milk and used it to improve erectile performance. They also made a solution from the leaves and seeds for healing wounds, this use continued through the Middle Ages and afterward. It has been added to tea as a spring tonic.

Have you ever found a Suspicious Item on your property, one that you suspected might have been left there by an enemy attempting to jinx or curse you? Agrimony is what you need. Just toss some in a paper bag, put the Suspicious Item in, then toss in more Agrimony on top. Close the bag and dispose of it in a trash can that isn’t on your property. The Agrimony will send the curse back to whoever tried to put it on you. Since Agrimony has hooked seeds, it can also be used to attract business, that is, to “Hook” customers, brew it into a tea and sprinkle it around your place of business.

Overcoming fear and inner blockages, dispelling negative emotions. Also used for reversing spells. Sew into a dream pillow with Mugwort for best results. Use as a wash or oil to increase the effectiveness of all forms of healing rituals. Wards off evil entities and poison.

High John de Conqueror and many other folk variants, is a folk hero from African-American folklore. He is associated with the roots of Ipomoea purga, the High John the Conqueror Root to which magical powers are ascribed in American folklore, especially among the hoodoo tradition of folk magic. Ipomoea purga, an Ipomoea species related to the morning glory and the sweet potato. The plant is known in some areas as bindweed or jalap root. It has a pleasant, earthy odor, but it is a strong laxative if taken internally. It is not used for this purpose in folk magic, it is instead used as one of the parts of a mojo bag. It is typically used in sexual spells of various sorts and it is also considered lucky for gambling. It is likely that the root acquired its sexual magical reputation because, when dried, it resembles the testicles of a dark-skinned man. Because of this, when it is employed as an amulet, it is important that the root used be whole and unblemished. Dried pieces and chips of the root are used in formulating oils and washes that are used in other sorts of spells.

High John the Conqueror is an indomitable figure of American folklore. He is said to have been an African Prince, enslaved in the south, but liberated by his own guile and will. He is never said to have had his spirit broken, therefore retained the will to trick his “Master” into freeing him. After freeing himself, High John is said to have returned to Africa, but left his spirit and power in the High John Root, that he may continue to care for his people until his return. It is said that merely by speaking the name of High John the Conqueror, one may invoke his power and protection.

The root itself is a boon to any working, the root readily accepts and amplifies any magical charge, and is used for almost every magickal purpose under the Sun or Moon. Though they are most commonly used as an ingredient in mojo bags, High John Roots can just as easily be buried, placed in locations of import, or carried alone on the person. For nearly any purpose, anoint a High John the Conqueror Root with the appropriate oil for the working, combine with an odd number of herbs, and a single stone. Combine these in a mojo bag, and anoint the bag with oil. This is powerful magic that continues to be used for success over obstacles, male virility, trickery and getting your own way. This root can be used as a talisman in any working, health, wealth, love, courage, and luck.

An “All Purpose” herb, the uses of High John include strength, confidence, conquering any situation, obtaining success, winning at gambling, luck, money, love, health, and protection. Useful in all ritual work pertaining to prosperity. Wash hands in an infusion of the herb before playing games of chance.