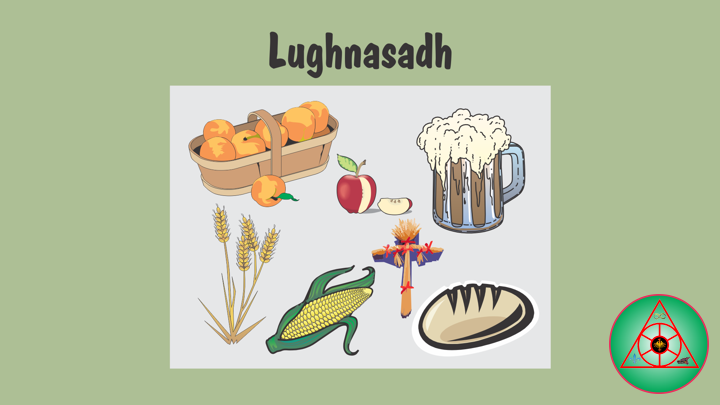 Lughnasadh, is a pagan holiday and one of the eight Witchcraft sabbats during the year. Each sabbat marks a seasonal turning point. The sabbat occurs on August 1, which is about halfway between the summer solstice (Litha) and the fall equinox (Mabon). This holiday celebrates the grain harvest. Grain is a very important crop for most civilizations. If the grain was left in the fields for too long, or if the bread made from the grain was not baked in time, families might starve.

It is now high summer and the union of Sun and Earth, of God and Goddess, has produced the First Harvest. Lughnasadh is the celebration of this first, Grain Harvest, a time for gathering in and giving thanks for abundance. We work with the cycle that Mabon or the Autumn Equinox is the Second Harvest of Fruit, and Samhain is the third and Final Harvest of Nuts and Berries.

The word “Lughnasadh” is derived from “Loaf Mass” and is indicative of how central and honoured is the first grain and the first loaf of the harvesting cycle.

In early Ireland, it was not good to harvest grain before Lughnasadh. If you did harvest before then, that meant that that the harvest from the previous year ran out before the next harvest was ready. This meant that the farmers would have failed in providing for their community. On Lughnasadh, the first sheaves of grain were cut, and by that night, the first loaves of bread for the season would have been baked.

In some traditions, this day honors the Celtic god, Lugh. This celebration of the god, Lugh is referred to as Lughnasad. Lugh is the god of craftsmanship, including blacksmithing, wheel making, and fighting. It is because he held a harvest fair in honor of his foster mother, Tailtiu, on this date.

Modern day bake breads and cakes to celebrate the historical grain harvest. Some observers celebrate with a harvest ritual. This ritual typically involves decorating an altar with symbols of the season. Some of these symbols include scythes, corn, grapes, apples, and any other crops that might be harvested at this time. Some of these rituals involve casting a circle, and saying some words that symbolize their thanks to the earth for the harvest. After the ritual, everyone there eats some bread together, and may also drink wine to wash it down. To honor Lugh, people make crafts and decorations for their house, to represent his skills in those areas. And as with most sabbats, there is feasting. This feast usually is prepared with one’s harvested crops at this time.

The Lughnasadh festival is said to have begun by the god Lugh as a funeral feast and athletic competition in commemoration of his mother or foster-mother Tailtiu. She was said to have died of exhaustion after clearing the plains of Ireland for agriculture. Tailtiu may have been an earth goddess who represented the dying vegetation that fed mankind. The funeral games in her honour were called the Óenach Tailten and were held each Lughnasadh at Tailtin in what is now County Meath. According to medieval writings, kings attended this óenach and a truce was declared for its duration. It was similar to the Ancient Olympic Games and included ritual athletic and sporting contests, horse racing, music and storytelling, trading, proclaiming laws and settling legal disputes, drawing-up contracts, and matchmaking. At Tailtin, trial marriages were conducted, whereby young couples joined hands through a hole in a wooden door. The trial marriage lasted a year and a day, at which time the marriage could be made permanent or broken without.

A harvest prayer, a token of love, a tradesman’s badge. The ancient art of braiding a “Corn Dolly” is almost as old as wheat itself. Corn dollies were created all over Europe to celebrate the scything of the last sheaf. According to legend, it was belived that the spirit of the corn, a fertility sprit made homeless by the harvest, must be accomodated if a good crop was to be forthcoming the following year, stalks from the last sheaf would be woven together into a shape or figure, in which the spirit would overwinter and emerge, restored, in the spring.