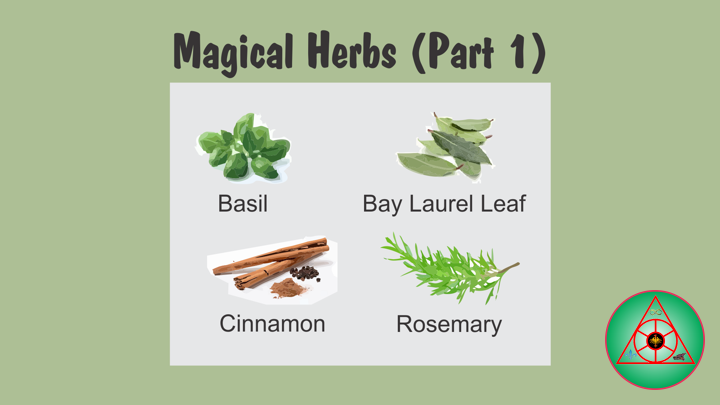 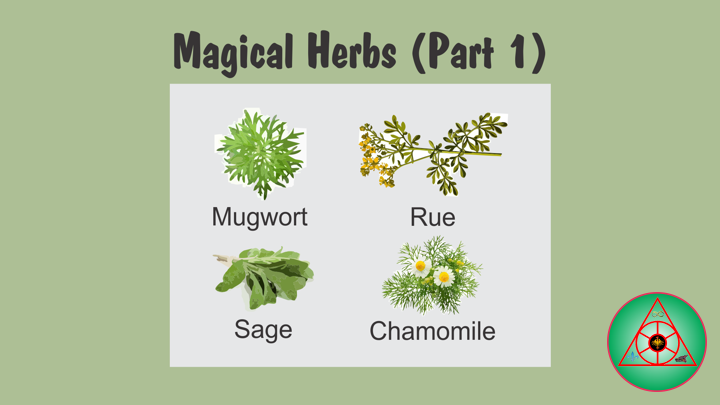 So, let’s talk magical herbs. Whether you think of them as mysterious plants that grow in the forest or the row of little bottles in your kitchen cabinet, they’re pretty useful, and they can be pretty confusing, even intimidating. What do you do with them? Which ones do I need? These herbs will help you with almost any need or problem you may have, as we shall explain. If you’re a practitioner of a modern magical tradition, chances are good that you’re in the habit of using herbs. Here’s a list of herbs that everyone should have on hand for magical purposes. Think of it as a basic Wizard or Witch’s arsenal of helpful herbs. Keep a few of these in your magical supply cabinet, just in case the need arises.

Basil is known far and wide as a culinary herb, but it also contains some interesting magical properties. In Mediterranean countries, it is strewn on floors to purify a home. It also can bring luck to people moving into a new residence, a gift of a potted basil plant guarantees good fortune. Magically, basil can be used in love magic and in love divination. Basil can also be used to guarantee fidelity, or detect the lack of it.

The Bay Laurel Leaf was awarded to only the most eloquent and victorious. In ancient Greece and Rome, crowns of Bay Laurel were awarded to those who had mastered a fine art or won an impressive military victory. Bay Laurel Leaf is a symbol of courage, talent, artistry, and most of all: victory. The Laurel was the tree of Apollo: Greek god of the Sun, wisdom, and creativity. Bay Leaves were used by the Oracles at Delphi: the leaves were cast into a fire; if they crackled, the omen was good. If they did not, the omen was bad. Recipients of a good omen were awarded a crown of Laurels. For this reason, laurel leaves are said to aid in divination, and to produce prophetic dreams. Due to their evergreen nature, laurel leaves are also a symbol of wealth.

Spirituality, success, healing, protection, power, love, luck, strength, and prosperity. Burn as an incense or use in a sachet to raise spiritual and protective vibrations, draw money, and stimulate psychic powers. A popular herb for use in charms to draw money & prosperity. Wear in an amulet to bring passion.

Carried and used in healing poppets for good health, used in love spells, worn to improve memory, used in dream pillows to prevent nightmares, burned as incense for purification and removing negativity. Wear or carry while reading or completing tasks to improve memory of the material and aid clear thinking. Use an infusion of rosemary to wash hands before any healing Witchcraft. Use in bath Witchcraft for purification.

Perhaps the most famous of magical herbs in modern times as a wort of witchcraft, surpassing even the infamous Mandrake, the delicate Mugwort is one of our most popular selections. Mugwort is used for a range of purposes, including love, healing, protection, prophecy, and dreams. The fumes of Mugwort are also an excellent offering to her patron goddess and namesake Artemis. A common ingredient in dream pillows, an infusion of Mugwort can also be used to wash one’s crystal ball or scrying mirror. Doing so will increase its power. Burning of the herb, alone or with its sister plant Wormwood (Artemisia Absinthium), will heighten psychic ability, and create prophetic dreams. Carried, Mugwort will protect the bearer from all supernatural threat and bane.

Witchcraft uses include healing, health, mental powers, freedom and protection against the evil eye. Use as an asperger to cast salt water for purification of the circle or removing negativity from the home. Hang the dried herb indoors to help yourself see and understand your mistakes. Burn to banish negativity or bad habits. Add to incenses and poppets to prevent illness or speed recovery. Add to baths to break hexes and curses that may have been placed against you.

Whether you prefer it in bundle or loose-leaf form, Sage is the most popular herb there is for cleansing and removing negative energy from your space. Smudging, the ritual burning of sage, is done to clear a space or person of negative energies. If your home feels stale or sad, if an argument has taken place and the air still hums with anger, if an unpleasant energy lingers after a visitor, these are times to smudge. One may also smudge one’s self to banish anger, ailment, sadness or illness. You can smudge your home or office, participants at a ritual, new possessions whose energy you mistrust, the options are almost limitless.

Chamomile is known as an herb of purification and protection and can be used in incenses for sleep and meditation. Sprinkle it around your home to ward against psychic or magical attack. If you’re a gambler, wash your hands in chamomile tea to ensure good luck at the gaming tables. In a number of folk magic traditions, particularly those of the American south, chamomile is known as a lucky flower, make a garland to wear around your hair to attract a lover, or carry some in your pocket for general good fortune.