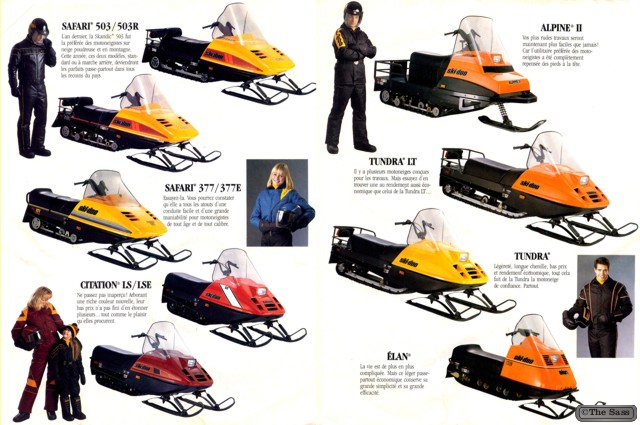 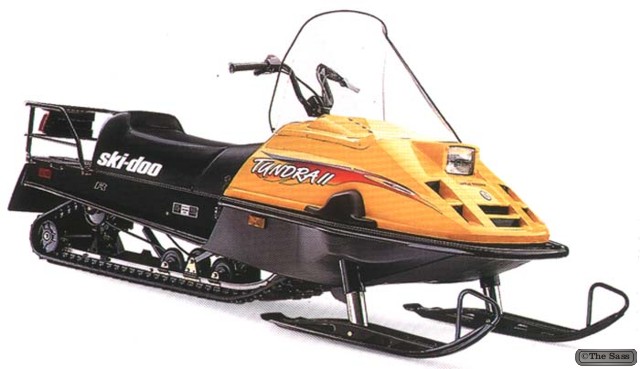 Ski-Doo is a brand name of snowmobile manufactured by Bombardier Recreational Products. The first Ski-Doo was launched in 1959. It was a new invention of Joseph-Armand Bombardier. The original name was Ski-Dog, but a typographical error in a Bombardier brochure changed the name Ski-Dog to Ski-Doo.

The first Ski-Doos found customers with missionaries, trappers, and prospectors, land surveyors and other persons who need to travel in snowy remote areas. The largest success for the snowmobile came from sport enthusiasts, a market that opened the door to massive production of snowmobiles. This popularity led to skidoo (sometimes ski-doo), with the derived verb skidooing (or ski-dooing), becoming the traditional generic term for snowmobile in much of Canada.

Before the start of the company’s development of track vehicles, Joseph-Armand Bombardier experimented with propeller driven snow vehicles. His work with snowplane designs can be traced to before 1920. He quickly abandoned his efforts to develop a snowplane and turned his inventive skills to tracked vehicles.

From the start the company made truck-sized half-track vehicles, with skis in the front and Caterpillar tracks in the rear, designed for the worst winter conditions of the flatland Canadian countryside. After producing half-tracks in World War II for the Canadian Army the company experimented with new forms of track systems and developed an all-tracked heavy duty vehicle designed for logging and mining operations in extreme wilderness conditions, such as heavy snow or semi-liquid muskeg. They produced it under the name Muskeg tractor.

Each track is composed of 2 or more rubber belts that are joined into a loop. The loops are held together with interior wheel guides and exterior cleats, commonly called grousers. The tracks are driven by a large drive sprocket that engages the grousers in sequence and causes the track to rotate. 2 belt tracks were common on early model Bombardiers as well as for muskeg machines. For deep snow use, wider tracks, employing additional belts, are used for added flotation over the snow.

The research for the track base made it possible to produce a relatively small continuous rubber track for the light one or two person snowmobile the founder of the company had dreamed about during his teen years. This led to the invention of snowmobiles as we know them.

Development of the Small Snowmobile

The Ski-Doo was originally intended to be named the “Ski-Dog” because Bombardier meant it to be a practical vehicle to replace the dogsled for hunters and trappers. By accident, a printer misinterpreted the name and printed “Ski-Doo” in the first sales brochure. Public interest in the small snowmobiles grew quickly. Suddenly a new winter sport was born, centred in Quebec. In the first year, Bombardier sold 225 Ski-Doos; four years later, 8,210 were sold. But Armand was reluctant to focus too much on the Ski-Doo and move resources away from his all-terrain vehicles. He vividly remembered his earlier business setbacks that forced him to diversify. Armand slowed down promotion of the Ski-Doo line to prevent it from dominating the other company products but still dominate the entire snowmobile industry. The snowmobiles produced were of exceptional quality and performance, earning a better reputation than the rival Polaris and Arctic Cat brands of motosleds. In 1971, Bombardier completed the purchase of the Moto-Ski company to expand the Ski-Doo line and eliminate a competitor from the marketplace.

I know the basics of the Tundra lineage, basically the Tundra was introduced in the 80’s with a 250 cc motor and came as a Tundra and Tundra LT, them the Tundra 2 came out (277cc).